What a fun day spent in Lynchburg, TN at the 17th Annual Jack Daniel's Invitational BBQ! It took us about two hours to drive from where we live, and when we arrived just a mile or so outside the city limits it was bumper to bumper... even tour buses were there... 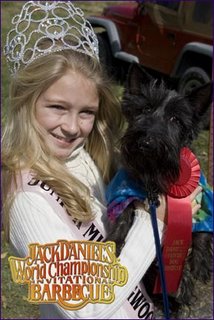 Lynchburg is a quaint little town where the Jack Daniels distillery is located. Many years ago when I first moved to Tennessee, I went to the distillery for a tour, it was so interesting. About I year after that, a deed arrived in the mail. I had been gifted a square inch of land located on the grounds of the distillery. I was officially a Tennessee Squire. Every year they have the barbeque they host a private party for the squires too, that is just one of the benefits. I also get a calendar every year, and sometimes a goody bag! We went to the party, and got a collector bottle of Jack signed by the master distiller, Jimmy Bedford, and also one of the tasters, Lynn Tolley signed our bottle (she also owns Miss Mary Bobo's - a restaurant in Lynchburg). The bottle of Jack was not free... they did however, give us a commemorative shot glass, a small shot bottle of Jack, and a squire pin. Very cool!

Anyway, we also entered our little girl Lucy in the Jack Daniels Country Dog Talent Contest... and guess what? She won second place! Her talent was that she sings Happy Birthday with me... and she sang the whole song and got more applause than any of the other dogs... we were real surprised she didn't win first place... oh well! So this is a picture of Lucy with Kelsie Hardin - Junior Miss Dogwood Queen. Aren't they precious?! 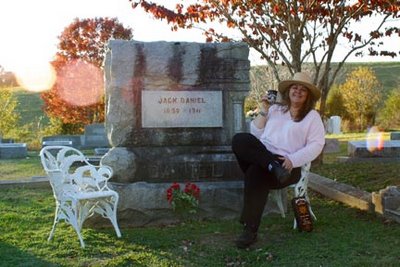 Oh yes, and when we were getting ready to leave there was LOTS of traffic, so Tim and I decided to drink our Jack Sours before we left (waiting for traffic to die down). We happened upon the grave yard in Lynchburg… we found Lem Motlows grave, and then Jack Daniels grave, and low and behold… two seats right on top of Jacks grave, so Tim took my picture right there on Jack’s grave enjoying a delicious Jack Sour… yummy!
at 10:02 PM