Taking photos of police officers could be considered a crime

The relationship between photographers and police could worsen next month when new laws are introduced that allow for the arrest and imprisonment of anyone who takes pictures of officers 'likely to be useful to a person committing or preparing an act of terrorism'.

Here's one I shot in December of 2002 in the Manchester airport: 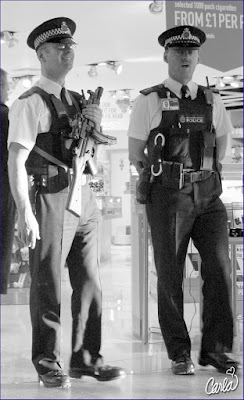 As you can see, one of the officers is looking straight into my lense. I was questioned for thirty minutes by these two officers... I actually showed them [almost] all the photos on my camera from our honeymoon... I was informed that taking pictures in the airport was not legal, it had only been a little over a year since 911.

Had they seen the picture I took of them, I believe I would have had my camera card confiscated at the very least... how did I do it you ask? Remote control - the camera was not up to my face - it was randomly taking photographs of passers by while on a tripod... I was actually just experimenting, and then the bobbies walked into the frame... lucky?
at 7:40 PM