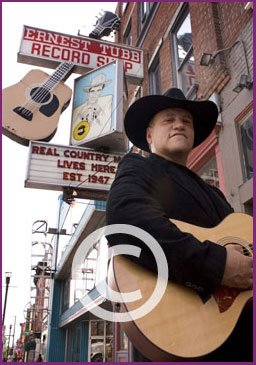 I love what I do!

Today I met and photographed a really nice songwriter from Minneapolis. I picked him up around 9:45 AM and we did the town for a little over an hour (to try and beat the heat, humidity, and a rainy forcast).

One of the things I love about using Nashville as my studio is that I NEVER know exactly what I'm going to use as my backdrop until I see it, and the vision is born. It makes for a really good shoot when my subject is a willing participant, and today, songwriter Stephen Crawford was just that...

It took the first part of the shoot for him to warm up to "having fun with it", but before I knew it, he was shining.

I love VERY many of the shots I took with him, but I think my favorite was one of the last (I'm on the ground to get this one). His attitude is so cool in this shot in front of the Ernest Tubb Record Shop... a V E R Y Nashville landmark.
at 12:46 PM No comments:

My cousin who has THREE children sent this to me. After I had a muffed laugh out loud at my computer, I wrote her back telling her that, "once again, my decision is confirmed", having children is not for everyone... besides, I married Tim, he generates ENOUGH worry...

Is there a magic cutoff period when offspring become accountable for their own actions? Is there a wonderful moment when parents can become detached spectators in the lives of their children and shrug, "It's their life," and feel nothing?

When I was in my twenties, I stood in a hospital corridor waiting for doctors to put a few stitches in my son's head. I asked, "When do you stop worrying?" The nurse said, "When they get out of the accident stage." My mother just smiled faintly and said nothing.

When I was in my thirties, I sat on a little chair in a classroom and heard how one of my children talked incessantly, disrupted the class, and was headed for a career making license plates. As if to read my mind, a teacher said, "Don't worry, they all go through this stage and then you can sit back, relax and enjoy them." My mother just smiled faintly and said nothing.

When I was in my forties, I spent a lifetime waiting for the phone to ring, the cars to come home, the front door to open. A friend said, "They're trying to find themselves. Don't worry, in a few years, you can stop worrying. They'll be adults." My mother just smiled faintly and said nothing.

By the time I was 50, I was sick & tired of being vulnerable. I was still worrying over my children, but there was a new wrinkle. There was nothing I could do about it. My mother just smiled faintly and said nothing. I continued to anguish over their failures, be tormented by their frustrations and absorbed in their disappointments.

My friends said that when my kids got married I could stop worrying and lead my own life. I wanted to believe that, but I was haunted by my mother's warm smile and her occasional, "You look pale. Are you all right? Call me the minute you get home. Are you depressed about something?"

Can it be that parents are sentenced to a lifetime of worry? Is concern for one another handed down like a torch to blaze the trail of human frailties and the fears of the unknown? Is concern a curse or is it a virtue that elevates us to the highest form of life?

One of my children became quite irritable recently, saying to me, "Where were you? I've been calling for 3 days, and no one answered I was worried." I smiled a warm smile. The torch has been passed.

PASS IT ON TO OTHER PARENTS (and also to your children. That's the fun part)
at 4:20 PM No comments:

This is The Secret to everything - the secret to unlimited joy, health, money, relationships, love, youth: everything you have ever wanted. 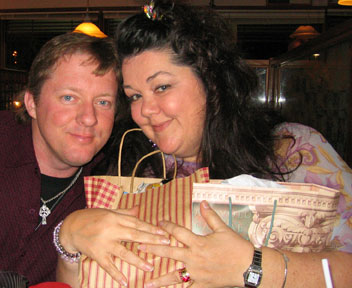 I have the cutest, sweetest, most darling husband! I told him that I wanted to be treated like a Princess for my birthday...! My wish was his command, he did everything in his power to deliver... AND HE DID IT!!!

Here is a photo of us at dinner, thanks to our great friends Christina and Mark for bringing a camera!