I am one of twenty-three 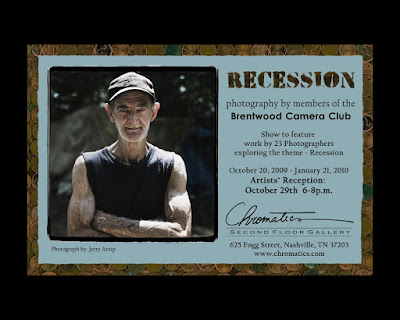 I am very excited to be a part of this [juried] exhibition... this economy has had an affect on my own life in many ways... not all positive - not all negative.

If I should die before I wake...

An email is received on Friday night that a new friend has died... a man that I only met twice - but who forever will remain with me and the funny story that he created on our last meeting.

FINNEY, Michael Dean "Rick" Was born in Nashville, TN June 8th, 1946, and died there on September 29th, 2009. He was preceded in death by his parents, Mildred and Sol Schulman, and beloved mother-in-law, Peggy "Me-Mama" Whitworth. Rick is survived by his wife, Eleanor Whitworth Finney; son, David Charles Whitworth; birth mother, Velma Dean Finney; father-in-law, Charles Bosley Whitworth, Jr.; brother-in-law, Charles Bosley Whitworth III, and his cousin, "Aunt Alice" Zimmerman. Mr. Finney attended old Woodmont Elementary School, Castle Heights Military Academy in Lebanon, TN, The Bellefaire School in University Heights, OH and University of Tennessee. Rick lived his life in Technicolor. He adored the Whitworth family's "Gin Farm," and managed it with a true love of the trees, flowers, streams and animals, as well as the Turnbull Sports Club members. But Rick will surely be best remembered for his truly incredible voice and songs. From singing bass with Johnny Cash, to many voices for Disney and commercials such as the Pace Picante Salsa classic "New York City ... Get a rope!" to movie roles in Jim Varney's Ernest Goes To Jail and Ernest Scared Stupid, Coal Miner's Daughter, At Close Range (starring Sean Penn and Christopher Walken), Sam Stumpf'sThe Misadventures of Amy Everhart (Winner, Best Children's Film, Long Island Film Festival) and NBC's Elvis: The Early Years, as well as appearances in music videos with Ray Charles, Waylon Jennings, John Prine, Keith Whitley, Dr. Hook, "Cowboy" Jack Clement, Hank Williams, Jr., John Hartford, Roy Orbison, Moe Bandy and Tammy Wynette. Many of his compositions were recorded by artists like George Jones, Johnny Paycheck, Charlie Rich, Bobby Bare, Freddie Hart and O.C. Smith. Rick's velvet voice and larger-than-life personality made him the hit of any party. He even shared the stage of Nashville's "Night Train" with acts like Little Richard, Jimi Hendrix, Bo Diddley, and Chubby Checker. He still holds the record for being the main opening act at Nashville's Exit In with his humorous songs and friendly stage presence. While there, he met and performed with such artists as the B-52's, Dobie Gray, Clifford Curry, Johnnie Rivers, Jose Feliciano, B.B. King, Steve Martin, Asleep at the Wheel, Del Shannon, Johnny Winter, Bobby Bland, Linda Rondstadt, Bonnie Raitt, Willie Nelson, Willie Dixon and many more. As one of his multitude of friends said, "What a beautiful human being!" And as Rick himself wrote, "We will meet, but we will miss him. There will be one empty chair. We will linger to caress him when we breathe our evening prayer." Indeed, know that your Lambie, Pikachu, and all of your countless friends love and shall miss our one-of-a-kind "Ramie" ... A Memorial service will be held at St. George's Episcopal Church, 4715 Harding Pike, at 11 a.m. Saturday, October 3, 2009 with family visitation and luncheon afterwards at the Finney home on Cornwall Avenue. In lieu of flowers, memorial donations may be made to the charity of one's choice. MARSHALL DONNELLY COMBS, (615) 327-1111.
at 3:21 PM No comments: